A Brief History of the Hyacinth Development..... 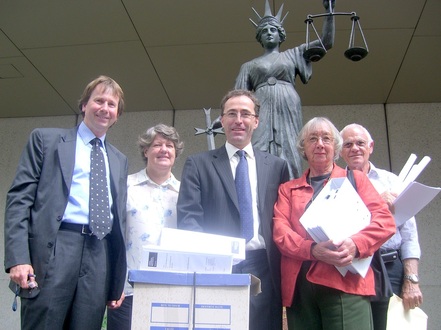 The Tamborine Mountain development on Long Road known as Hyacinth resulted from a successful rezoning application to the then Beaudesert Shire Council in 1990.  This development was initially intended for older persons housing but after the rezoning it was to become a working flower farm and residential area with facilities for tourists.

Subsequently, Beaudesert Shire Council approved incremental changes (including some under delegated authority) which collectively changed the original approved rezoning to something vastly different.  The series of changes stretched the 1990 approval to 43 “one bedroom” houses, 92 units, a motel, a large exotic bird garden component (next to National Park rainforest), 20 bus parks, parking for 135 cars, tourist eating facilities and a manager’s residence.

After amalgamation in 2008, the new Scenic Rim Regional Council deemed the changes by the earlier Beaudesert Shire Council to be “generally in accordance” with each consecutively changed plan.   From comparison of the original 1990/1993 plan with the final version, it was clear to anyone that something was drastically wrong.

Newly appointed Councillor Derek Swanborough tried to stem fallout for the new Council.   He warned the Interim CEO that the Hyacinth decision made whilst Beaudesert Shire Council was in “caretaker mode” three days before amalgamation & Council elections should be reversed immediately.  Council needed to inform their insurers, in case the developer made a claim.      Read further.. “Local Councillor steps into quagmire”

When the scope of the final stages of the Hyacinth development dawned on the mountain community, alarm bells started ringing.    Tamborine Mountain Progress Association and other residents had lengthy sessions with Mayor John Brent pointing out that there was a big problem and he should seek an independent opinion.

In the Beaudesert Times dated 4th June, 2008, the headline read “Review clears Beaudesert Shire Council”.  The article stated that “a council commissioned independent review into the former Beaudesert Shire Council’s actions over the Tamborine Mountain Bird Gardens development…..found it acted within its authority”.    Also, ‘Scenic Rim Regional Council voted to receive and note the report during a closed meeting”.   Mayor John Brent acknowledged the community’s concern but was satisfied due process had been followed.

Ex-Councillor and engineer Phil Giffard made a series of comprehensive submissions to Council through May, June & July, 2008 which concluded that the approval process since the 1993 rezoning had been fundamentally flawed and no development approval should have been granted without exhaustive independent investigation.   No response was ever received.

TMPA sought clarification from Council.   Files were not available; files were “in storage in a shed in Tamborine”;  etc. etc.    TMPA was being given the run-around.

After many months, TMPA, using what information it had, sought the advice of lawyers in the Environmental Defender’s Office who agreed there were areas of deep concern and that there appeared to be problems with the sequence of changes.

Council was being unresponsive and no further options were available.   TMPA, to protect the interests of the community, finally resorted to the Planning and Environment Court.

The ensuing long-winded court saga was essentially in three parts.

Stage one was the TMPA appeal in the Planning and Environment Court against all the “generally in accordance” changes which transformed the 1990 rezoning.   Unsurprisingly, all these were eventually declared unlawful by the court.    Judge Alan Wilson stated that Council decisions to approve the Hyacinth changes were “inexplicable and incomprehensible”.  He   declared the “generally in accordance” amendments to be unlawful.   ﻿Read further…. “What the Judge said”   ﻿

Before this hearing started in August, 2009, Scenic Regional Council had indicated that it would not oppose TMPA’s claims and would adopt a neutral position in the ensuing court process indicating it did not see any prospect of winning the case.

However at the last possible moment, in what can only be seen as a face-saving exercise, the executive of Council engaged a Senior Counsel to defend the matter.   Read further… “Council absolves itself from blame”

Council gained approval for a small section of the contested matter.  This was a 43 lot subdivision (on the smallest of the three lots which comprised the Hyacinth development).    This subdivision had been passed by the old Beaudesert Shire Council after the third (unlawful) amendment to the original rezoning.   All building on the site was ordered to be stopped.

The development then reverted to two large lots and a 43 lot subdivision.

Stage two   From experience, not trusting Council to deal with this mess responsibly, TMPA appealed the judge’s decision on this one point (the 43 lot subdivision).    This decision was taken after lengthy deliberations with lawyers.   Consideration was given to the undesirable density of the subdivision, risk to potential buyers and costs involved.   Costs in the Supreme Court can be awarded against the loser.

The 43 tiny lot subdivision was virtually of no use to anyone.  The lot sizes were not big enough to comply with local regulations.   The mountain has no reticulated water or sewerage.

After the court cases were finished, the developer applied to the court to have the 43 allowed tiny lots reduced to 19 lots.

The Council’s last ditch decision to employ a Senior Counsel to defend this unwanted subdivision saw Council expenses on this case now approaching a total of nearly $300,000.

TMPA lost this appeal in the Supreme Court on a technicality (Sept. 2010) and costs were awarded against it.

Stage three  of the overall case was an application to the Planning & Environment Court by the developer against Scenic Rim Regional Counsel and TMPA, basically to reinstate approvals for capital works carried out and to allow development on the site to proceed.    This application was subsequently withdrawn.

TMPA had spent some $45,000.00 on the Hyacinth matter, all of which was raised from broad community donations and volunteer effort.

In September 2010, not wasting any time, Scenic Rim Regional Council debated the matter of costs against the Progress Association.   It was this deliberation from which Tamborine Mountain Councillor Derek Swanborough was debarred on the quite spurious grounds that he had a Conflict of Interest in the matter.  Cr Swanborough’s Division 1 encompassed most of the Tamborine Mountain plateau.

Had Cr Swanborough been permitted to debate with his colleagues he might not have been able to change the outcome, but it was surely his democratic right (and that of his constituents) to put forward all aspects of the matter including the history, not all of which would have been familiar to Councillors from other Divisions.

Scenic Rim Regional Council determined that TMPA owed it almost $36,000.00 for the failed Supreme Court appeal.  There would appear to be some credence in the hypothesis that Council could have left the matter to the three judges and not even made an appearance in that Court thus saving the ratepayer (in this instance) more than $36,000.  The subdivision proved to be useless to anyone.

Scenic Rim Regional Council claimed that it owed it to the ratepayers to try to extract costs from TMPA.  This does not sit well with its willingness to spend $280,000 (on record in Council files) of ratepayers’ money to fight the initial case in the Planning and Environment Court and then the subsequent appeal in the Supreme Court.  Had it listened to TMPA, to Cr Swanborough and to other residents in the first place, in all probability none of the expenditure for either party would have been incurred.

TMPA is an Incorporated Association with a century old history of community service.  It had no assets except a small bank balance and at the time it owned the Tamborine Mountain News.

The Tamborine Mountain News’ editorial policy was to always actively support stated residents’ prime interests, namely their lifestyles – relaxed, environment friendly, semi-rural/country and definitely non-urban.  If Council’s actions ran counter to these aspirations, the paper was not slow to publicise this.    During TMPA’s ownership, Council had attempted to interfere with editorial policy on several occasions.   A different newspaper editor, faced with similar attempts to interfere with his paper’s content reported the practice to media regulators.

TMPA and the Tamborine Mountain News were in the gun sights of upper bureaucrats and the mayor (with a mostly tame set of councillors).   A corporate style of governance did not sit well with a community organisation and a community focused media outlet.

Council decided to send TMPA an account for the Supreme Court costs amounting to almost $36,000.   With no assets (The Tamborine Mountain News had changed ownership well before a judgement was handed down) it was clear Council’s aim was to close a century old community organisation and its connection to a media outlet.   Often, publication of questionable bureaucratic recommendations to Council which could have damaging impacts on residents’ preferred lifestyles drew very large responses from the mountain community.   During court sessions of the amazing supermarket case, several instances of  experts’ opinions of mountain residents were recorded…… “community not shy about stating its views” and (re 1,100 objections).. “not surprising, given the nature of the community”.

The bill for $36,000 floated back and forth between the lawyers for most of a year.

With Council elections fast approaching.  Council dropped the matter at the end of 2011.

The complex Hyacinth development had the potential to affect the whole plateau.  It is situated directly opposite the North Tamborine primary school and traffic congestion and the safety of school children was a consideration.  The subdivision potentially affects the visual amenity of the mountain and the village ambience.  It is situated on a major tourist artery.   The tourists visit the mountain primarily for a relaxed “country” experience.  It could adversely affect the adjacent native rainforest and even impact on the groundwater aquifers underlying a key part of Tamborine Mountain.

In the Hyacinth files held by the Scenic Rim Regional Council, one very large folder is devoted solely to the letters from hundreds of objectors to the proposed massive development.  Whilst nearly all are on pro formas, most have very strong hand written messages from people who are passionate about this unique plateau and the lifestyles they have discovered.  Any reader could not help but be stirred by these letters.    They explain the actions of the Tamborine Mountain Progress Association.