To the residents of South East Queensland this small plateau sitting beside the state’s two largest cities presents a happy, quick retreat from pressures of day to day urban living.   It has always been so.

There is recorded history of reports from the 1890’s of people visiting the area “to escape urbanization”, attracted by the mountain’s unique environment.  Indeed, even today, the mountain and its escarpment contain about 80% of the region’s flora and fauna. 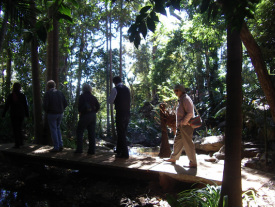 A study by Tourism Queensland found that Tamborine Mountain is the most visited day destination in South East Queensland.    Approximately 1.3 million visitors arrive each year.

A survey by the Progress Association over one weekend found that 94% came because of the environment.   In a broad sense, this encompasses the views, forests and the general cottage garden semi-rural character that the mountain presents.    Fifteen percent were visitors from overseas who were holidaying in the region.

As “the green behind the gold”, Tamborine Mountain is a regional asset in the important state tourism industry.   Underpinning this, the region has benefited from the care and input provided by the waves of residents who have made the mountain their home for well over a century. 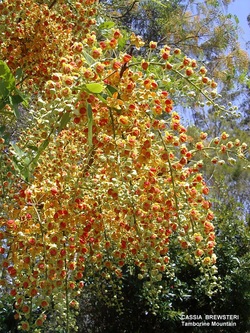 People visited, liked what they saw, and took up residence here.  The attraction was not the usual things associated with a sizeable community.  It was not just a place to live, nor was it for jobs, and indeed there is almost no infrastructure here.    An estimated over 90% of the residents have arrived on this small plateau for a particular lifestyle which has small-village qualities and is semi-rural.  There is no other large community like it in Australia.  It is quite unique.

This did not happen by design.  Rather, as a relatively remote community, it tended to look after its own affairs and shape its future.   Of course a community organization sprang up very early in the piece.

THE TAMBORINE MOUNTAIN PROGRESS ASSOCIATION  was formed in 1915. This was in part to help maintain the newly gazetted National Parks.   Witches Falls National Park was the first proclaimed national park in Queensland, in 1908.     The mountain has six national parks.

“Progress Association” is an old fashioned name for a community organization.  Its title has been kept for historic reasons as there are not many left in Australia.   They are mainly sprinkled around country areas. 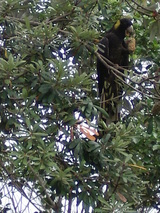 Throughout the decades the Association provided a central point through which residents could manage the area as they thought best.    Over the early years community concerns centered mainly on agriculture and the blossoming tourist industry.  Tamborine Mountain was a separate shire till the forties.

Up till about the eighties, agriculture played an important role here.    Early saw milling gave way to dairying, then the growing of various crops.   Citrus, passion fruit, flowers then avocados and rhubarb just loved the local rich red volcanic soil and the (mostly) abundant rainfall.

Small settlement nodes grew into three village areas and later several residential estates were added.    The resultant separation of the more populated areas by rural precincts now gives the impression of a semi-rural community.   An area with 7,000 residents elsewhere would simply be called a large town.
AGRICULTURE & TOURISM
NEW ROADS
So popular was Tamborine Mountain that the first asphalted road in Queensland, along with Queen Street Brisbane, was built from Tamborine Village Railway Station at the bottom of the mountain to the top at Doughty Park in 1924.   This road displays the earliest road building engineering practices and was Heritage listed by the Progress Association in 2002.

With the large increase of private car owners, this new road soon began to suffer wear and tear.   Worse, the farmers at the top of the mountain were being hit with larger rates to cover the cost of road repairs.    The community found a splendid solution.     A toll gate was erected at the base of the mountain.    This stayed in place for fifteen years from 1930.
THE “DO IT YOURSELF” ROAD
But it was another road that galvanized the community into even more serious action.    In the 1950’s residents wanted to provide good road access to the coast for their children to attend high school there.  The State Government was not coming up with any help, so the up-grading of a bush track was done by the residents themselves – all with lamington and cake stall drives and similar fund raising activities.    Click here to learn more.....
TAMBORINE MOUNTAIN NEWS 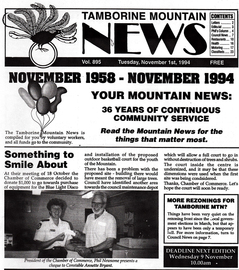 From lively meetings of the Progress Association, the Tamborine Mountain News was launched in 1958.   It was the first quarter fold paper in Queensland.

The paper was established to disseminate news about the progress of the new road being built by the community.  Soon a gravel road took shape from Eagle Heights past Coomera Weir and onto the Pacific Highway.   It was sealed ten years later and today we know it as the Oxenford Road.

Over the years other groups were formed from the central community organization and many still function today;   Natural History Association, Bush Volunteers, Historical Society and the Garden Club. 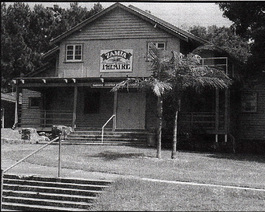 In 1972 the Progress Association bought the Zamia Theatre, both for general use by the community and also to provide a venue for the open monthly public meetings which residents could attend to discuss and deal with whatever problems arose.

Much of the work done by the Progress Association in the ensuing years was to pay off the purchase debt.   A large number of functions were staged, often with wide community input, e.g. by the Little Theatre and other groups, until finally the debt was repaid.  Click here to learn more....
﻿POPULATION GROWTH  ﻿
Meanwhile, resident numbers steadily increased.  Gradually, from the ever growing stream of visitors, people returned to make their home here, and in turn, reinforced the mountain’s distinctive character.  However, until the early 1980’s, it was relatively expensive to build here as there were no building outlets on the Gold Coast.  The cartage for materials from Brisbane added up to 10% to the cost of building a house.   This changed mid 80’s and by the 1990’s, the beginnings of a population boom were becoming apparent.

This led to a need to upgrade the ineffective 1983 Development Control Plan.   After a long gestation period, in which there was extensive feed back from the population, plus input from the State and Local Governments, a new Development Control Plan was produced in 1997.    It became the best indicator for the  aspirations of local residents for many years to come, and indeed it still holds the key to the mountain’s valued character we see today.
PLANNING

For the past two decades, the role of the Progress Association has changed.   Faced with perceived threats from inappropriate development, the Association became more involved with the vexed problem of town planning.

Advice sought from the then Mayors of Noosa and Port Douglas, as well as from independent planners was to stick to our Development Control Plan and consider the plateau as a whole.

To view it like a patchwork quilt, or with tunnel vision, is exactly how the jumble of the Gold Coast grew to what it is today.    The Association’s basic course of action has been to follow this advice.

Many epic battles have been fought.  The community saw off major potential changes such as the cable way partly over our National Park, an Indy style motorway off the western escarpment, a bus depot at Witches Falls National Park, a Sphere near the show grounds, the beginnings of a theme park and many large dense subdivisions.   In short, the place could have looked vastly different today.

The Tamborine Mountain News, produced mainly by volunteers but with editorial independence, continued to play a central role in quickly providing the community with formal information for their responses to perceived threats to their chosen lifestyles.   Compiled by TMPA, published pro formas listing codes important to residents have provided the balance to developers’ often different values.       The community has famously been referred to as one “not shy about stating its views”.     In a court case recently, the high number of submissions (1,100 against) was raised several times with comments such as “not surprising, given the nature of the community”.    The paper was sold in 2012 and now functions as a commercial news outlet.
OTHER ACTIVITIES 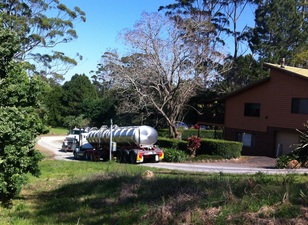 Along the way, the Progress Association has also tried to help other communities – mainly Canungra, Tamborine Village and more recently the rural community of Kerry.     When the residents of Springbrook were fighting off a proposed cableway to their area, the Association advised a more effective way of dealing with the situation which ultimately led to the desired result.

More recently, the Progress Association has been dealing with commercial enterprises extracting a huge volume of water from the mountain’s aquifer for sale as bottled water in distant places.  This activity has been a major concern for residents for many years.   Large water tankers working day and night are also a worry both for residents as well as visitors.

The Association has continued to hold open monthly meetings.    Without the resources to meet the cost of necessary repairs, the Association returned the Zamia Theatre to the Tamborine Mountain Rainforest Trust, which it had established in 1989.    Meetings were then held at the Information Centre, Doughty Park, and since that venue’s takeover by the Chamber of Commerce, meetings are currently being held in the Historical Society’s rooms in the Creative Arts Centre, Wongawallen Road, Eagle Heights.

THE FUTURE
In the next twenty years, an estimated two million more people will come to live in South East Queensland.   Close to two cities, this small plateau is a limited, high value scenic area.    Pressure for large undesired change here has already been evident.     This place is a magnet to cashed up developers, many with little or no sensitivity to the value placed on this mountain by its residents and the countless visitors that come each year.

More than a century of resident input has produced an admired famous scenic area – a unique “Island in the Sky”.     It would be a great shame for all concerned to lose it.
Powered by