the paper with a purpose 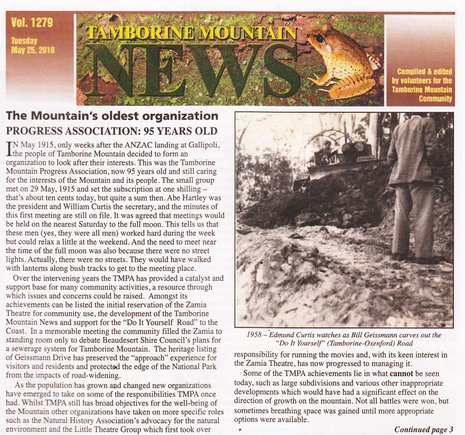 It was the first quarter fold A4 quality newspaper in the country and was primarily responsible for the unusual country-style, relaxed, environment friendly character of Tamborine Mountain that we see today.   Whilst it could be labeled “parochial”, the paper always kept residents informed of matters which could not be learnt elsewhere.

A 28 square kilometer plateau close to two large cities – Brisbane and the Gold Coast – Tamborine Mountain has been a magnet for inappropriate development applications for many decades.   Dedicated to preserving the mountain’s unique character, a steady stream of volunteers to help compile the paper ensured that any threat to the lifestyle valued by both residents and visitors was very quickly relayed to the community for its response.

The Progress Association was able to regularly insert pro formas listing formal points for residents wishing to respond to inappropriate development applications.   Whilst a developer pays experts to support the aim of his application (mainly financial gain), the Tamborine Mountain News was able to supply planning codes appropriate to Tamborine Mountain residents’ preferred lifestyles without cost to the community.   Explanatory articles, often on the newspaper’s front page, accompanied these news items.


Large inappropriate subdivisions, a cableway, a dome near the showgrounds, theme parks, an adjacent Indy style raceway and a Disney style giant avocado together with a train on Gallery Walk were some of the proposals rejected by residents.    The mountain today could have looked an entirely different place.

Ownership of a newspaper entitled a representative who attended monthly council meetings to receive the minutes of all council meetings for the month.   A team of people then checked for items of interest to Tamborine Mountain residents and comments were made in the paper – from residents’ view point rather than any Council “spin”.   Regular columnists filled in with more details.

What has resulted is a strong community bonded by its broad love of the environment.  An estimated over ninety per cent of the population has arrived for its unique lifestyle.

Hordes of visitors arrive each year.   It is the most visited day destination in south east Queensland.    With its rainforests and wonderful cottage gardens, the area is commonly known as “the green behind the gold”.   A breath of fresh air away from stressful urban life.

Credit for this outstanding achievement lies not only with the volunteers, but especially with its tenacious, dedicated editors, longest serving whom being Eve Curtis, later joined for many years by George Fisher.

George, for about twenty three years, edited, proofed, perused council papers wrote council notes and found interesting articles for the paper’s readers.  His sharp wit was appreciated by many readers.

Eve, since becoming an editor in 1971 carried out a demanding heavy schedule every week for forty one years!!  This must be a record anywhere.    In the early days, production of the paper required the editor to take a bag full of bits of paper to the printer in Beaudesert where the paper was laid out manually on long sloping desks.   Much changed over the years and emails and the internet did away with physically dropping off drafts in people’s letter boxes.

Why the Tamborine Mountain News was different from regular commercial newspapers is that it always had an editorial policy – to first and foremost serve the best interests of the community.    Relying on community feedback of long held lifestyle expectations, the paper was able to provide a tool with which the community could help itself.

Successive waves of residents, particularly over the past two decades, learnt to keep a sharp eye on the paper to be ready to protect their own best interests.   Having found an idyllic existence and being kept well informed, people were not slow to protect what they valued. 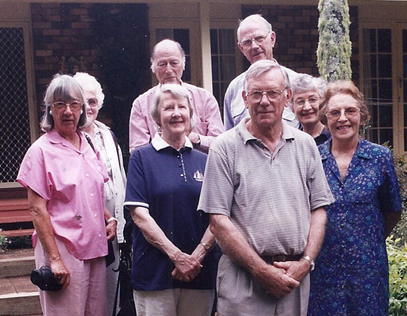 In 1958 the Tamborine Mountain Progress Association decided to publish a small newspaper to disseminate information of general interest to the community.

At that time much community effort was taken up in building a new road towards Oxenford.

Parents had been meeting to arrange a bus service for children to attend high school in Southport.   The new Tamborine Mountain News was able to co-ordinate road building efforts as well as inform residents of its progress.   Working bees, cake stalls and fund raising, much at the tourist destination of Curtis Falls were organized.

The first editor was Bill Reeve, followed by Elton Staffsmith.  He was joined in 1971 by Eve Curtis, who remained editor till sale of the paper in 2012.   Attracted to a worthy cause, volunteers happily helped run the paper.  This was bolstered by the continuous support of loyal advertisers.   Issues which were of concern, especially to the broad community, kept materializing, so the many contributors always felt they were doing something for the community.

Over the years the Tamborine Mountain News produced a regular small profit which was always donated to community causes.  Initially, two bursaries were awarded to high achieving students completing grade seven and going on to high school.  Payments were also made for such items as road signs and contract work on the McDonnell Ridge Road, and also for the purchase of the Zamia Theatre in 1972.    Profits from the paper continued to help maintain the Zamia Theatre until 1994 when theatre rentals began to cover running costs.

Colour arrived in 2001 and several colourful local mastheads were used.    Computers made life easier for the News team and using the internet to send the final copy to Beaudesert streamlined the process even further.

In 2004 the Progress Assn bought back ownership of the Tamborine Mountain News from the Rainforest Trust.   Acquisition of land was then out of the question as it had become too expensive.  The Association then dispersed profits (after repayment of repurchase debt) to community organizations.  First cab off the rank was the Rural Fire Brigade with a cheque for $1,000.

It required a great deal of work by the editors and the team to produce a comprehensive paper each fortnight.  Making a small profit for the community organizations is one thing, but what kept people contributing was the knowledge that the paper made such an enormous contribution to the quality of life on Tamborine Mountain.

The philosophy of community service which prompted the start of a small local paper remained till the day it was sold.   Helping to retain the character of a unique area, not only benefited the community, but also the region and the large number of appreciative visitors from around the country and indeed the world.

The Tamborine Mountain News was sold in September, 2012 and now functions as a standard commercial newspaper.