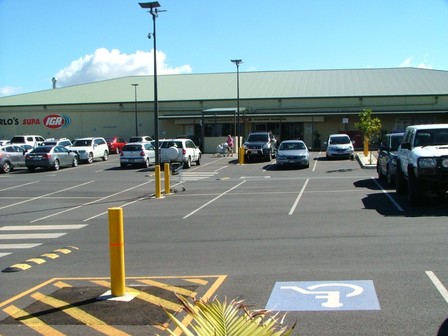 Comments describing the new supermarket have reflected a broad common response from Tamborine Mountain residents  -   “huge”, “wide open spaces”, “concrete jungle”, “a bomb crater” and similar views which describe a facility many people see as not sitting well in the mountain landscape.

The resultant impact of shifting an anchor facility out of the Central Business District is unsettling for the more than fifty traders there.   Empty shops are not good for business.

The giant new supermarket  - outside the CBD, contravening two Planning Schemes, one thousand one hundred resident objections, no mention of a “need” in Council’s costly “Future  Planning Scheme” and a lot notation stating “not for commercial purposes” ---  how did this happen???

Early history
A Development Application for the 1.3 ha Baker’s Acres site on Main Western Road was received by the Beaudesert Shire Council early in 2007.   On 27th April, 2007, a Council officer advised the applicant as follows:

",,,,,,,,,,,,,,Council Officers advised the Applicant that this submitted application in its current form  would be unlikely to be supported as the proposal of “Specialty Shops & Professional Offices” could easily be accommodated on a smaller site within the Business Precinct.

If the Applicant wishes to pursue the current application before Council then the Applicant will be required to justify the further need for the proposed uses within this locality.

Due to the subject site’s large land area when compared with surrounding allotments within the Business Precinct, Council is of the mind not to compromise the sites potential to facilitate a supermarket development containing a minimum GFA of 1500m* to service the future population of Tamborine Mountain.

The Applicant agreed with Councils request to amend the current proposal to reflect a development that is predominately of a Supermarket nature that may further include the initial proposed uses including Professional & Consulting Services, Specialty Shops & Medical Centre providing all that other requirements pertaining to a development of this nature are met……………”

The Development Application was originally due for consideration at the Scenic Rim Regional Council meeting of 19th August, 2008 with Council recommending approval.   However, this item was taken off the Agenda at the last minute and was then referred to an outside “peer review”.   The Council report (posted on the internet) makes interesting reading.

The Development Application included consultants’ statements such as:

“……….the proposed development has minimal traffic impacts and the surrounding intersections will operate with satisfactory level of service…………”

“…………..there is a significant and overwhelming need……….so no need for residents to travel to Beaudesert  and Jimboomba………….”

The report stated that all issues were satisfactorily addressed and “it is unlikely that the proposed development will impact upon the existing social, cultural or environmental values of the locality”.  It also stated that the strength of the public’s negative response was not evident and only seven issues were considered.   These were summarily dismissed by Council responses such as their “containing no planning merit” or the issues were addressed in (the developer’s) consultants’ reports.    What was clear was the disconnection between Council and the ethos and environmental sensibilities of Tamborine Mt.  residents.

The closing statement by the Council officer included……..”it is considered unlikely from the findings of the assessment of this proposal that any detrimental impacts would occur as a result of the proposed development proceeding in this location.”

The Director’s recommendation was that the application be approved.

It should be noted that the objections by residents were on proper planning grounds.  The numerous and complex codes in the planning Scheme should add up to a desired outcome when values of a particular community are taken into account.  The planner (a non-resident), by selecting his own personally preferred codes chose to contradict legitimate codes valuable to Tamborine Mountain residents.

A review of this report by a panel of Tamborine Mountain residents found many inappropriate assertions which could not have been made by anyone familiar with the mountain ethos.

Not surprisingly approximately 1,100 objections saw the Development Application sent off to a second “peer review” by Council’s CEO.   And for a second time, a peer review stated that the application should be refused. Council sat on its hands.  As a decision was not forthcoming in the required time, the developer lodged an Appeal in the Planning and Environment court on a “deemed refusal by Council”.

To its credit, Scenic Rim Regional Council decided to defend the Appeal.   It now fell to Council bureaucrats who were prepared to approve the Development Application to instruct Council lawyers to defend a “deemed refusal”.

To complicate matters, the developer now had his case bolstered by Council’s published preparedness to approve the development.

The Appeal in the Planning & Environment Court

Seven full days in the Planning and Environment Court in March 2010 saw a battery of lawyers, town planners, landscape architects, urban designers, traffic engineers, water specialists, economic analysts, etc. outline a case for and against a large supermarket on Tamborine Mountain.  It was estimated the developer spent nearly half a million dollars to support his case.

Due to already heavy financial commitment to the Hyacinth case, the Progress Association had to rely on advice from experts from Council, Evergreen/Ryjaan and Prescare.

Gaven Developments Pty. Ltd. needed to prove that the need for the establishment of their trading precinct on a residential block was so great that it warranted the over-riding of two planning schemes, the deemed refusal by Scenic Rim Regional Council and the 1,100 objections received from residents.

The Local Area Plans for Tamborine Mountain take into account the separation of residential activity from the tourist routes.   The Central Business District which is used by residents is located along a dead end off-shoot (Main Street) from the main tourist route.  The objective here has been to consolidate social cohesion, and contribute to the sense of community that the residents value.

The Gaven site is outside the CBD, along the major tourist artery.   The Development Application contained a 2000m* supermarket, medical centre, pharmacy and specialty shops.

An application for a larger supermarket with sufficient parking on Main Street within the CBD (by a different developer) awaited the outcome of this Appeal.  Fifty per cent of Main Street is still available for commercial development in the future.

It was acknowledged that shifting an anchor supermarket out of the CBD (next to the Post Office and library) would remove the vibrancy from the street’s business activity and Council’s lawyers argued that “it would rip the heart out of the business precinct”.

Currently on Main Street there are about fifty businesses serving the residents and seven which serve both residents and tourists.   It was acknowledged in Court that shifting a supermarket to the proposed development site would affect many businesses.   It was estimated there would be a $13 million p.a. loss from the Main Street precinct.

Several aged persons multiple unit establishments have been built in close proximity to the smallerIGA in the CBD.   They stood to lose convenient access to these facilities, as would the 300 – 400 residents who live in and around the CBD,

A new large correctly zoned medical centre had already been built nearly across the road from the Gaven site (by another developer).   The pharmacy’s new location is now next door to this new medical centre.

Across the road and on a lower level to the Gaven Development site is Roslyn Lodge.    This is the mountain’s aged care facility and its entrance directly faces the Gaven entrance.   There is a significant slope down into the Roslyn Lodge premises.   Roslyn Lodge also opposed the Gaven project, as did the company owning the adjacent commercial sites (Evergreen/Ryjaan).

Whilst water experts came to agreement about managing the site, fears were held by the Progress Association and others that the measures recommended would not be enough to cope with the frequent torrential and often flooding rains the mountain experiences.  There was a high probability that vast surfaces covered with concrete and buildings would result in damaging run-off into Roslyn Lodge.

Roslyn Lodge withdrew from the case on 28th February, the last day, because of “financial constraints”.   The Prescare Property Manager had already been in dispute with Gaven for a considerable time.

In his judgment, the Judge (a tax expert) cited the Council planner’s report recommending approval as a major argument to approve the Appeal by the developer pending the finalization of the draft concept roundabout drawings. 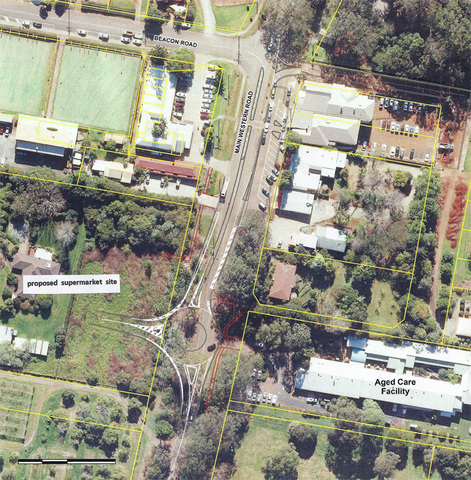 Main Western Road is a narrow single lane thoroughfare.   Working out a possible five finger roundabout on a narrow road, suitable entry space for the establishments on either side of the road and dealing with the limited distance to the nearby crest and sharp southern bend was no doubt a challenge for the traffic engineers.

Gaven Developments returned to Court on 28th February, 2011 seeking a Final Order.    The Judge expressed surprise (twice) that Gaven had not done anything to the original draft roundabout concept plans since the earlier Court sessions a year previously     He did, however, grant a Final Order, on the understanding that the road works and subsequent conditions could satisfy adjacent property owners and the community.

In December, 2011, a small notice in the library window indicated that work was to take place (starting the previous week) on the Gaven roundabout.    A number of people requested further information but this was refused on the basis that the design was the property of the Applicant and his Engineer and could not be published.    It became apparent that approvals for this work and also commencement of site works were granted by both the Dept. of Motor Transport & Main Roads and Council on the word of the Gaven developer.

Many problems were apparent in the now changed design.   A former Design Manager, Department of Transport & Main Roads, Nerang and a local resident, identified at least six design factors which should have prevented approval of a roundabout at this particular site.

An alarm was raised in the following months but many phone calls and much correspondence from a number of people, plus detailed submissions by a local engineer failed to receive any satisfactory response.   DTMR kept repeating standard office-speak and incorrect assertions.

DTMR finally had a meeting with affected parties, the area Councillor and TMPA on 1st March, 2012.   There was little change to the situation, with DTMR adamant that it was necessary to get an approved design in place to avoid the developer “going belly up”.     DTMR also stated that it was no use complaining to the Minister as he would then routinely repeat the information DTMR would supply.

Evergreen/Ryjaan commercial properties and associated businesses across the road have been degraded and are suffering commercial damage.

A letter in May, 2012, from TMPA to DTMR requesting an answer as to how the roundabout design was developed without any consultation or input from the community and adjacent property owners, and suggesting that the information given to the Court was not correct, received the oft repeated “fill” and the regularly repeated meaningless assertion that “discussions were still continuing”.

Tamborine Mountain now has a flawed sub-standard roundabout at its most trafficked node.   DTMR officers, ignoring the mountain’s renowned reputation as a villagey/semi-rural plateau, referred to this North Tamborine area as “urban”.    Well it is now !!

At the end of the day, it is estimated that, after all, there will not be a great change to the 60% leakage of retail shopping off the mountain.  The relatively small plateau is unlikely to ever have the vast variety of facilities available in nearby areas, e.g. medical, clothing, entertainment, building requirements, etc. and many residents will continue to combine their shopping needs in off-mountain excursions.
Powered by