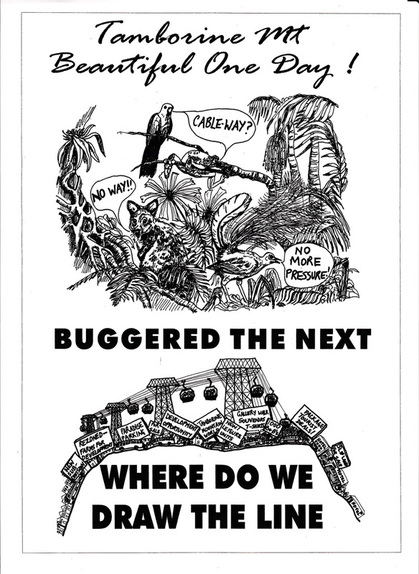 This hoary chestnut bobs up now and then when some bright spark (mostly from the Gold Coast) suggests it would be a certainty to make heaps of tourist dollars.   There appears to be no serious study ever made as to whether this would actually happen.

About ten years ago when the mountain boasted about 4,000 residents, 1,170 people stated they did not support a cableway from Coomera/Willowvale to Tamborine Mountain traversing the Tamborine Mountain National Park arriving at the northern end.  Fifty seven supported it.  The highly successful Cairns/Kuranda skyrail was being touted as a desirable project to emulate.

For the cableway to Tamborine Mountain to have been viable it was estimated that it had to service at least 500,000 tourists (possibly up to two million) each year, i.e. at least 1,370 people each day.   Cost of a ticket then (one way) was estimated at $50.

Tamborine Mountain residents very quickly identified many areas of major concern.   These included the mountain’s lack of infrastructure – water, toilets, effluent disposal, etc.    Kuranda had town water long before it got the cableway.

Unlike the wet rainforest area of Kuranda, our open eucalypt forest is highly susceptible to bushfire.   This would have necessitated fire breaks thus scarring our escarpment and disrupting our wildlife and biodiversity.

Unlike Tamborine Mountain, Kuranda is on a large plateau similar to Toowoomba, and its tourist shops are on about half a dozen streets.    Bus and cableway destinations there are confined to a particular large area   On Tamborine Mountain we have shops at Gallery Walk but there are eateries dotted amongst residential areas right across the plateau.   Relatively narrow streets would need to cope with sizeable extra bus traffic spreading throughout the community.

We can learn from Kuranda’s experience.

From a quiet quaint country-style little township in a rainforest setting, Kuranda exploded into a bustling fast, smart, unrecognizable reinvention of its former self.

“The cries from the ordinary residents who just wanted to enjoy their chosen lifestyles away from (the) maddening crowd were drowned out by the progress of big business.

And, all the while, Kuranda continued to clean itself up, pave its streets, and remodel the houses in the main street that had given Kuranda its “Village in the Rainforest” reputation.  Quaint arts and crafts stalls gave way to smart, glass fronted shops.  The market atmosphere dwindled.  Huge buses lined the streets, with their engines running to keep them cool.   It was impossible to get a car park.  Still the tourists came.     (0pen Letter, Impact of the “Skyrail” cableway on Kuranda, Nth. Qld.,   Jax Bergersen)


The cableway idea has never really gone away.

The idea has taken root and been shelved many times.   Occasionally the plan has been to take it to Springbrook.    A plan for a cableway to Springbrook which predated the earlier Tamborine Mountain effort drew a huge public response, which included many well known celebrities.   TMPA helped formulate a pro forma strategy in this case.

Tamborine Mountain is approximately 25 to 30 kilometres from the coast and an interesting distant skyline featuring the “tombstone territory” strip can be enjoyed by the vast number of visitors driving up and down our mountain roads.   The distant view can be seen from many vantage points on the plateau.

A ride in a cablecar or chairlift today is no longer a novelty in itself.  Many travelers today are familiar with unbelievably stunning views experienced by this type of tourist attraction found on the various continents.    Even Kuranda has an iconic scenic railway to round off a memorable experience.

A deterrent for a major cableway to Tamborine Mountain would be the large cost of a ticket if the operators wish to cover not inexpensive establishment costs.

Tourists would need to be transported on and off the mountain thereby significantly increasing traffic on our mountain feeder roads.    Traffic is increased on market days.

Would an influx of tourists lead to an increase in shops and a super sized multiple road “Gallery Walk”?

And with a constant stream of tourists sailing past the eastern escarpment, how would residents alongside and nearby react to the sight and noise impact?

No doubt these issues will be raised again and again.
Powered by