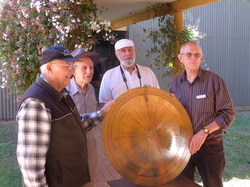 This directional plaque was put in place in 1964 at the corner of Oxenford Road and Short Street.   It was actually the third of such plaques around Tamborine Mountain.   Two of these dials had been put in place by Progress Association’s working bees in 1954, the first being at the Knoll and the second at Lahey’s Lookout.    By 1957 both these dials were removed by vandals.

The third plaque was erected at Jenyns’ Lookout on MacDonnell Road (also called the Oxenford road) to commemorate the hard work done by the local population in opening a road to the coast.    It represents an incredible community story.

Costings were done and on 4th April, 1966 a Progress Association meeting resolved to offer help with funding of the plaque.  A committee including Councillor Jenyns was empowered to decide on the wording.   A later meeting decided to request Council to name the site “Jenyns’ Lookout”.

Like the first plaques and with little development yet on the mountain, the Jenyns’ Lookout plaque pointed to the many stunning views which could easily be seen from the mountain.  South Stradbroke Island, Flinders Peak and Mr. Lindsay are some of the many features of the surrounding landscape inscribed on the plaque.

As the plaque had been offensively graffiti-ed, it was decided to restore it to its earlier clean face and as many of the directional views are no longer visible from this spot, the plaque has been placed in the Historical Society’s rooms and is available for the public to see.
Powered by