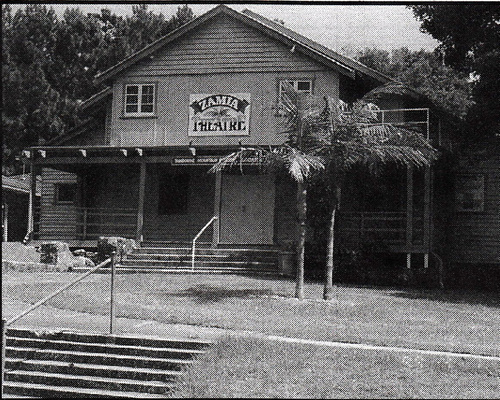 Built in 1923 by the Tambourine Public Hall Company, the Zamia Theatre passed through private hands several times before being sold by the Howard family to the Progress Association in 1971.

It had already spent many years providing entertainment for residents of the mountain and for a period, together with St. Bernards Hotel, provided the only public venues where people could socialize and enjoy themselves.    The Howard family which had been running the theatre for many years was acutely mindful of the theatre’s value to local residents.  This led them to sell to the Tamborine Mountain Progress Association, then a fifty six year old community organization.

Whilst the Association was keen to continue to promote the theatre’s usage, it also needed a public venue to hold its monthly meetings.   As the Tamborine Mountain community had evolved from the early days of isolated pioneers into a population still motivated enough to participate in broad issues concerning residents, a large meeting place was necessary to hold all levels of public debates.

Over the thirty two years of its stewardship, the Progress Association saw the theatre used for widely diverse functions.   It was the only remaining picture theatre in the Beaudesert Shire.  Some of the best balls ever were held there.

With excellent acoustics, the family friendly hall regularly resounded with lively music and the happy sounds of people from all generations.

The theatre was a popular place for orchestral and vocal concerts.   The Queensland University Musical Society regularly practiced there before their concerts.  Other choirs such as the Quodlibets and the Jubilate Singers paid regular visits to the mountain to give concerts there.   After an orchestral concert the conductor, Georg Tintner, remarked that the acoustics were wonderful.  He seemed quite unfazed that the dressing rooms were not!

For the first few years after the purchase of the hall by the Progress Association, members of the TMPA ran the film evenings.   Private operators, including the Zamia Pix group, took over for a few years.  Then Little Theatre members added screening of films to the many tasks they undertook to help keep the theatre active.   Over the years the Little Theatre members played a significant role in helping keep this hall going.

Perhaps the most memorable of the many public meetings was the Council held meeting known locally as the Great Sewerage Debate, when Beaudesert Shire Council tried to impose on the mountain a sewerage system without a water supply.   The hall was filled to capacity.  People stood shoulder to shoulder -  in the supper room and kitchen, on the verandah and right out on to the road.

Due to public pressure the project was abandoned.  The proposed site for the sewerage system was in the valley between Forsyth Drive and Kinabalu Drive through which flow streams which ultimately end up in the Coomera River.    Today this area, after years of dedicated work by the Garden Club, is now the mountain’s much admired Botanic Gardens.

Election times saw the theatre introduce all the shire’s candidates at large and interested public gatherings.

A packed house came to participate in the public response to a proposed cableway from Willowvale to Tamborine Mountain which threatened the mountain character, resident lifestyles and the national parks.    A separate organization comprising representatives of different groups was formed and yet another battle was launched. 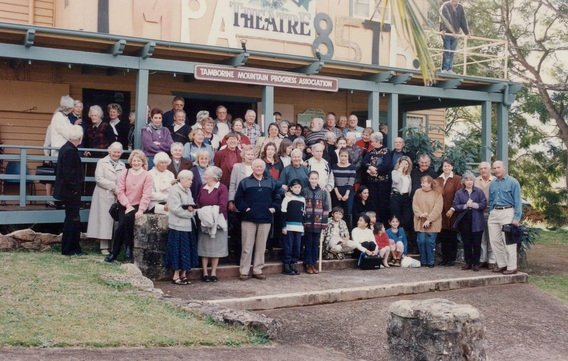 Under the ownership of the Progress Association, the hall was rewired, restumped, the plumbing replaced, white ants removed and it received a new roof.  The toilet block on the southern side was completed in 1974 and by the end of 1975, a suspended ceiling, wall linings and new lighting had been installed.    The theatre was repainted internally and the kitchen was improved to the limit of funds available.

Considerable expenditure in 1996/1997 was met from the Gaming Machine grants, Beaudesert Shire Council and energetic local fund raising.   Further fund raising in the form of sausage sizzles, book stalls, raffles and sing-alongs under the banner of “Operation Facelift” provided enough money to repaint the building.

All this expenditure was greatly reduced by the generous free input by many local tradespeople. 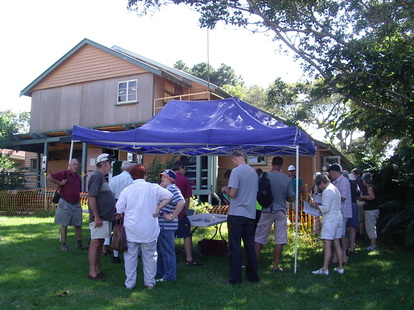 We nearly lost it

To prevent a hasty decision to sell from taking place, ownership of the Zamia Theatre was transferred to the Tamborine Mountain Rainforest Trust in 1990.   The Trust had been set up by the Progress Association in 1988.

The Progress Association continued to manage the Zamia until 2004.   Although hall rentals since 1994 were enough to pay for regular ongoing expenses, it was becoming increasingly evident that major repairs and upgradings needed to be made.   Bearing in mind the current public liability uncertainty and the increasingly litigious nature of society, a careful inspection revealed that public safety appeared to have been compromised.  To address the requirements of the Workplace Health and Safety Act was beyond the capabilities and resources of the Tamborine Mountain Progress Association.  Reluctantly the Management Agreement was terminated in 2004 and management handed over to the Rainforest Trust.

At a Beaudesert Shire Council meeting in 2006, the arrangements for the Council to take over the Zamia Theatre from the Rainforest Trust were finalized.   In return the Rainforest Trust took ownership of two pieces of Council land – one in Main Street, adjacent to the National Park near the War Memorial.  The other is on Eagle Heights Road, opposite Cook Road,

Very large and expensive structural repairs were subsequently made with funds from the Federal and State Governments, Beaudesert Shire Council and a great deal of fund raising by Little Theatre.

Over the many years a great many volunteers were involved in the theatre’s management, repairs and upgradings.  The Zamia’s ongoing needs provided a central engrossing interest for a great many mountain residents.  Happy times were engendered by all their efforts which contributed in a significant way to the unusual and envied community spirit which is still evident today.

Managed by Little Theatre,  the Zamia continues to play a central role in community affairs.
Powered by