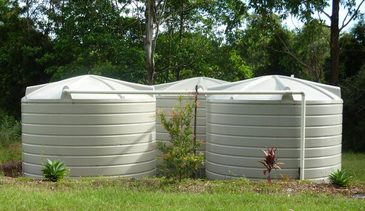 Tamborine Mountain residents have long had a problem with commercial water extraction.   There is no reticulated water on the mountain.  It has approx 7,000 residents.

Bore water is our secondary source of water, the main one being roof rain water collected by all residents & stored in tanks.   There are about 1,000 bores on the mountain, not all functioning at the moment.   Some people top up their water needs from bores.    In times of dry weather, local water distributers have a busy time, with some people waiting many weeks for a delivery of about 2,000 litres of water.

In the mid nineties, several small local operators were bought out by off-mountain commercial interests and this industry has grown at a fast rate.  Today there are about six or seven businesses which could come under the “commercial water extraction” code.  There are probably two small operators who supply local demand. 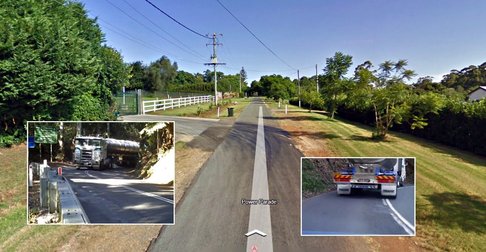 ​Gillion Timeline - 2019
In 2009, due to pressure from neighbours, Scenic Rim Regional Council applied to the Planning & Environment Court for a declaration that use of land in leafy, residential Power Parade (Tamborine Mountain) was unlawful as no effective development permit had been issued.  The Court declared the business unlawful.

This is a business operated by Gillion Pty. Ltd. for bottled water for sale in many parts of the region.   During operation of this commercial business, neighbouring residents’ bores have run day.   The adjoining property at the back is a lawfully operating commercial nursery.   It had recently paid about $40,000 for a new bore to service their business.   The ongoing extraction of water from the Gillion bore has caused the nursery bore run dry.  It was established in court that both bores are on the same aquifer.

In 2010, whilst the Court declared the business unlawful, it allowed Gillion to continue trading whilst a Development Application was being prepared.   This was done in 2011 and further extensions for trading were requested.  These were approved.

Later that year Council refused the Development Application.  About 900 residents had formally objected to the operation.   Gillion took the matter to the Planning and Environment Court.

The court process covered several years, with water extraction on Power Parade continuing and disturbing neighbours.   The granting of approximately twenty extensions to trading was due to some inconsistency in Council’s processing of the application.   Whilst Council had formally refused the Development Application, its planning department had recommended that the Court declared “unlawful” practice be declared lawful.  This report remained on Council’s website.   Finding itself “between a rock and a hard place” the Court had felt this was a matter to be determined and let the issue run its course.

The Appeal evidence was heard over several periods – November, December, 2012 and February, 2013.  Eighty three residents elected to stand as Co-respondents and many residents attended court at each sitting.

On 3rd May, 2013, Gillion’s Appeal in the Planning & Environment Court was dismissed, mainly on planning grounds.

The case generated substantial costs to the residents, as a separate team of lawyers and experts was engaged to protect their interests.    Money was collected across the mountain, with a large proportion coming from immediate neighbours.     This is an excellent example of what people power can achieve. 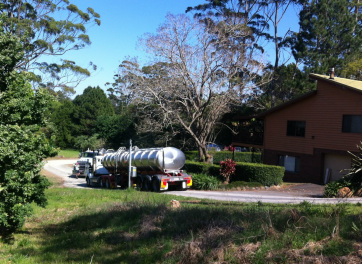 Although the Appeal by Gillion Pty. Ltd. had been refused by the Planning and Environment Court in May, 2013, another Development Application for the same scale commercial water extraction was lodged by Pure Mountain Pty. Ltd. for a site on Bateke Road.

This was also located in a Village Residential Precinct and did not comply with specific outcomes for the Tamborine Mountain Zone Code.     Objections from residents across the mountain raised issues such as impact on amenity and raised doubts about sustainability which could have a widespread effect in times of prolonged drought.

Haul routes for these 28,000 litre cover State controlled roads and also Council roads which are not constructed to withstand the constant impacts associated with the loaded tankers.   Gallery Walk itself is regularly crowded with tourists who would not be aware that many large tankers regularly pass through this shopping street.  To many tourists, Gallery Walk presents nearly like a mall, with strangers ambling across the street to the shops on either side of the street.

Whilst most tanker drivers are courteous, the slow speed of the vehicles up and down steep narrow mountain roads is of constant concern to mountain residents travelling these routes..

In October, 2013, Council refused Pure Mountain’s Development Application and the matter was lodged in the Planning and Environment Court, although the “test case”, Gillion, was still to be resolved in the Supreme Court.

Approximately 100 residents chose to be Co-Respondents, standing alongside Council, TMPA and the Eagle Heights Village Association.   The first court hearing was on 29th November, 2013 and a timetable of procedures was established with the Appeal set down for May, 2014.

In February, 2014, Pure Mountain chose to discontinue its Appeal with all parties agreeing to this action.  The subsequent Court hearing (14th February) declared that “Commercial Ground Water Extraction” at this site was unlawful.   “The Premises do not enjoy the benefit of any existing lawful use rights permitting the extraction of ground water from the Premises for the purposes of sale or supply off site without an effective development permit.”

Commercial extraction must cease by 9th May, 2014.    Conditions of operation specify the vehicle movements per day (4 X 27,000 litres approx. plus 2 X 13,000 litres approx. for domestic use), the use of Hartley Road - Oxenford Road as the haul route, and school peak periods restrictions.

The battle of mountain water problems has not finished.  Although two large proposed commercial operations are exiting the scene, others continue trading.   Large 28,000 litre tankers operate day and night, on narrow mountain roads and mostly through tourist packed Gallery Walk.    Complaints from residents keep coming in.

There is wide speculation about what Scenic Rim Regional Council will do next.
Powered by